JAYANTHI NOT-RAJAN :one crashed over the Cuckoos Nest

The field of jeopardous aviation has offered unfettered challenges to the deviously crafty and predictably ambitious.For baskets full of examples, just scoop in a stingy serving of the political breed and behold, you will have baskets full of tales. One such misery laden tale is that of our motor mouth spokesperson of the ruling tribe, Jayanti auntie. 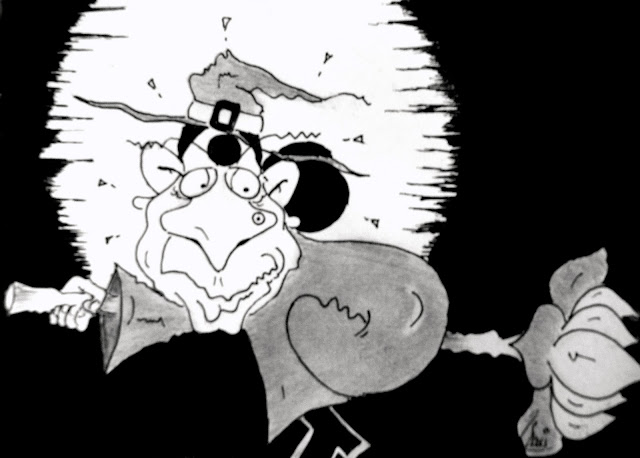 Long long ago, two days back, the lady of the anti Lotus pack broke the pristine chill of the winter evening by marching in, huffing and puffing,to the local broomstick vendors store.The shop keeper gasped for life giving air, his tongue still tied in disbelief at the entry of the 'spitfire celebrity'( Read Spit + Fire ejected in equal measure). The lady was a founding alumnus of the theatrical Hogwart of the East '10 Janpath'.

'Present me the best of your stock' she growled,the acoustic field shattering window panes and ear drums in the same breath.The vendor quickly turned and disappeared, returning with a pile of handcrafted brooms under which he seemed well buried and hidden.Personally, he preferred more of the latter than the former.
'Madam may like if I explain....', he trembled behind the fear flavored sentence. In contrast,she nodded in virtuous dictatorial acceptance and demanded  'I would want to know what broom stocks, contemporaries and colleagues are flying on ??'

'That would be my pleasure madam' the vendor exclaimed,familiar with the rodent race emulation in their circles.Only recently, he was witness to a very high level debate on a topic of national interest 'My used toilet paper is cleaner than yours..HOW ??. Breaking into an uncertain smile, unsure of what sweeping fate awaits the sale of a flying broomstick he set his pitch.

'This is ZERO, the hush and no feed variety, actually a rage these days with both, our silence loving PM and a fasting CM endorsing its efficacy.'  He then gambled his chance of placing his attention seeking footprint into the inner circles grapevine '...if you pardon my audacity, a secret perhaps known to you. For our beloved PM, we delivered a custom made remote controlled model to ensure he treads silently.. on course.Your masters are happy customers '

The customer hissed at the mention of the well nourished public secret,'show me something else',she bellowed,not wanting the slightest smear of controversy to upset her dynasty serving apple cart.

'Sure my lady' remarked the anxiety soaked vendor and pulled out a flat stock with subtle bristles.'This one will definitely be of interest  to you, it boasts of V.T.O.L capability..'

'..And pray, what may V.T.O.L be, is it an antitheses or  pun .. Very Tiring & Obvious Liability perhaps ? ' she quizzed in angry anticipation of any sarcasm, but the empathy was uncomfortably mirrored .

'Oh no.. no !',he exclaimed, ' it is a leap in 'sweep stick' technology, VTOL is an acronym for Vertical Take Off and Landing.It saves you the take off thrust to be generated by the tiring run.' From a convincing personal comfort zone, he switched gears and dolled out  a generous oodle of scientific anal-ogies. ' All you are required to do is, exhale, pull your thoracic diaphragm in - upwards and let go all generated pressure called Breaking Take Off Wind (BTOW).   BTOW expelled through the rear amplification nozzle, creates a magnified vector thrust propulsion that levitates both broom and body.' Convinced that science had created a facade in the mind of the seldom right but never wrong breed, he decided to lap up the pitch with a personal touch   'Again madam, i must say this, we delivered two products to Yeddy and Kalmadi serving time and running their new found homes in various hospitals. Now they dont have to be on the run you see, they simply can take off from their respective hospital beds and visit the 'in law' when the heat is on.'


She managed a discounted grin seasoned with patented sarcasm.

Realising, that a lot more had to move, topple or fly  to win more than just a customer, he extended the sky darting product line. 'We also undertake custom  brooms.Trust me madam...' making the glitter in his eyes economically obvious, 'It is a sure hit and bound to  sweep you off your humble feet'

'It would serve well if it could sweep others off their ambitious feat',rebuked the  temporary Goddess of jilted poise, adding a snare as a purring suffix.She was quick to bounce back into the process of active political consumerism. ' Custom made.....I dig that,I ..like the sound of what you sing, what can you do ?' she diligently questioned.

'Any high flying wish of yours is my command', baritoned the tentatively pigeon chested and permanently poultry bellied gentleman.
'Can I get something with floral bristles..' enquired the increasingly scheming grandstander. ' A little more opposing both in colour, feel and...' as the sentence trailed,the exuberant salesman jumped to the well garnished occasion and pointed out to the far corner, where gleaming in new found glory, lay THE broomstick of desire. Seller and buyer moved in poetic tandem, the latter mesmerized, unfolding what wonders the broomstick could sway to wipe out all forms and flavours of ignoble competition. The latter, certain that he had nailed the sale, but with guarded uncertainity.... about the chosen model, meeting the soaring expectations of the buyer.


The prospective buyer continued the ordinate ogle, which was interrupted by an undeserved aberration ' But... madam, this is a test model....' interpreted by awestruck tympanic functioning as 'fest'. Dutifully, the hearing dysfunction did the trick and the deal was sealed.' Will buy....ensure a politicians discount' declared the leader of the m'asses'.

'I will fly right now and self piloted it will be', the buyer announced, lest the thunder be stolen by an unknown.The seller protested in muted abandon.  ' .. it is dark and conditions are not favorable for night flying ..' The doubted status was not well taken by the new owner who fumed in aghast  'Dont you know.. world over, politicians are fly by night operators. ?'  Feigning ignorance about the high flying potential of his customer, he consented.

With the verbal rant over,pre flight probes revealed a mammoth bug ,A broom engineer opined in school choir tenor 'Considering the lotus airfoil...the thrust to weight ratio may effect the lift parameters,besides the pilots non aerodynamic constitution would hamper...'
That highly valued professional discourse in aviation physics suffered instant castration at the hands of impatient excitement and seasoned arrogance.The flying cleaner of infinite wonder  was grabbed by the new owner already inflating sullen lungs.She took control and let go for thrust vectoring to take over.WHOOSH.... she was airborne with nerve wrecking shudder. The Lotus petals unfurled to provide aileron and flap camber while the sepals served well as an elevator.The stale bud doubled up as an unstable rudder.Suddenly, the airborne broomstick veered off course, performed an acrobatic scam roll and crashed into a towering tree of fate, atop which was the humble dwelling of pious cuckoo. The cuckoo was scared out of his silken nightcap, presented by the minister of environment and forests as compensation to relocate. She who now dangled from above in a state of shock and topple.

In far away netherworld,in the kingdom of the clawed palm, the time tested principles of good education have been delicately strewn to the winds, lest it should fall with an avoidable thud and attract unwanted attention.

A tale spinning barrister, the self professed omniscient adversary of the good, claims magical powers unlimited.He could devour a ministry and still look starved else in simpler terms, sell water to a fish. 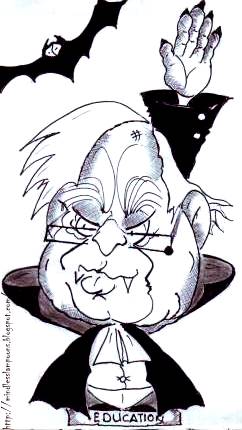 He has just returned from a bleating jaunt where he amazed the horrified citizen with unadulterated travesty on how measly pocket change like Rs 1.76 lakh Crore could just vaporize and the exchequer was all smiles..... bearing no loss at all, whatsoever.His suave brilliance sent the comptroller and auditor general spiraling down a commode with all those years of a painstakingly earned reputation in the challenging arena of auditing.That was his cunning specialty, pulling golden rabbits and red herrings out together.

In his devious court,me a jester,can only ogle and itch my crown on the Confucius state of a proposed education budget to implement the Right to Education (RTE) : Rs 1.72 lakh Crore.Now that is indeed some more loose change to vapourise.
Posted by http://mindlesslampoons.blogspot.com/ at Tuesday, October 18, 2011 6 comments: 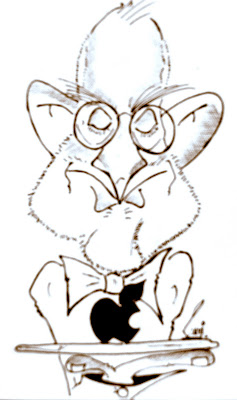 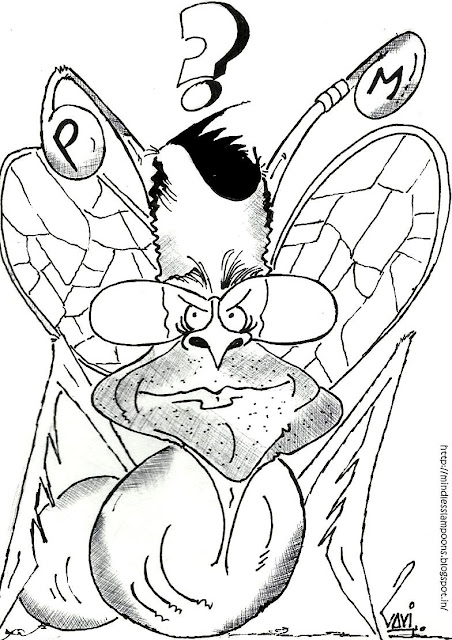 silence was a choice
but set the prince off poise.
cronies,
like a train of slandering bugs
continued the shameless chug

OOPS ...A feeble fling, in attempting to pen a limerick to support the sketch.

A 'nondescript' attempt to describe this 'Blow- Hot, Blow Cold or....Blow whatever' equation. 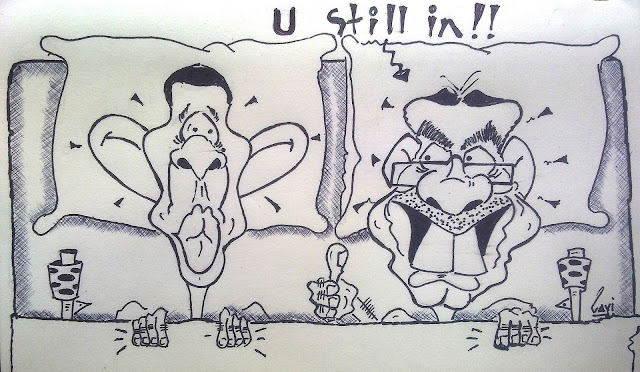 As the old phrase goes, between the sheets, there is always a fortune cookie.
Posted by http://mindlesslampoons.blogspot.com/ at Saturday, October 08, 2011 6 comments: