The well known fairytale of greed, finds a suffocating empathy in the terrified sway of many an unfair tail in the city of Nawabs. The prodigal mahout of a million marble elephant statues gazes at the lifeless Jumbo regiment in absolute awe.

In rehearsed tyrannic motion, she steps forward and announces to the mammoth line up,brushing under the marble parade, in one divisive sweep, the voluminous charge of corruption. 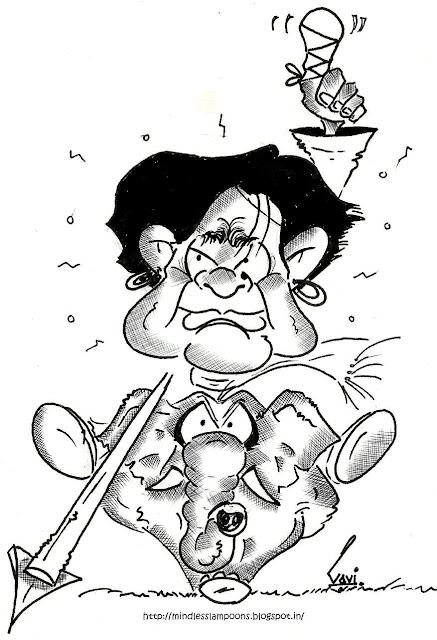 Between her professed sermon and our committed silence, one marble elephant managed to whisper to another of his kind.

" Did you know, an ancient language of this land, describes the word MAYA as an illusion. ''

''Our mahout leaves no stone unturned....'' the other retorted. ''She lives up to her name in letter, spirit, expectation and integrity''  he added with an assuring smile.
Posted by http://mindlesslampoons.blogspot.com/ at Monday, November 14, 2011 10 comments: 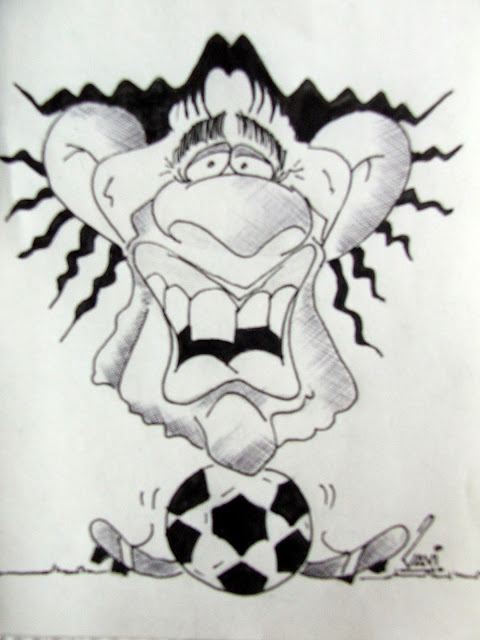 After all that rant with the political class, tried my hand at a sportsman,Carlos Alberto Tévez, the Argentinean football wonder who also courts controversy with club football.
Posted by http://mindlesslampoons.blogspot.com/ at Saturday, November 12, 2011 3 comments:

To foster this national sentiment,a state emergency was declared.  The military called on the parliament to perform a multi- jester clown act while they did the democratic thinking. A quick fix solution emerged in true military style. Pakistan would field its own version of the coveted Formula one...... For-Mule-A One.
As the name suggests, a race of its kind, to grade mules: the official state carrier of the Kalashnikov trotting ISI branded terror monger or... the jihadi posse in the gun powdered local tongue .

The proposition was simple,The military would conduct the race.An international audience with fat purses would be invited to witness. Mules of national importance would run a predetermined track carrying a dead weight. Alongside aid seeking bowls will jut out for the audience to fill. The mule that collects the maximum foreign aid would be declared the undisputed  victor. For any reason, if there be a tie, the head of the jihadi regiment will flip a coin to seat the winner.

The stakes that awaited the winner were what a mule of flamboyant national character would die for... a decimal share of the aid collected with 'come-passion',the pomp and glory of a military parade where the celebrity animal will cart the dreaded headless head of the military, followed by a full blown gun salute,which the international media would report as a terror attack successfully thwarted by the grandstanding Army. 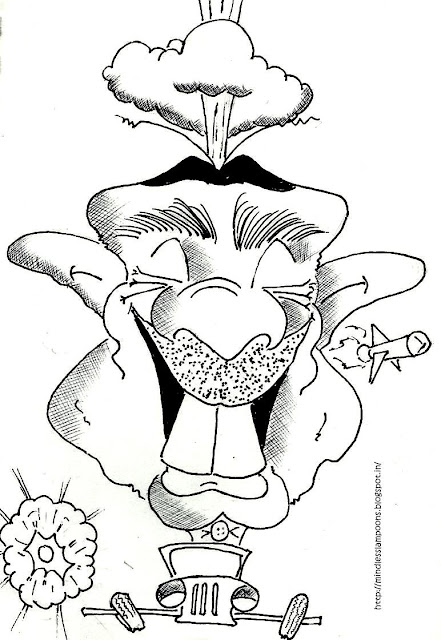 When word of the race trickled into the follicle sporting ears of the  Prime Mule (PM), ASIF ZARDARI , he was all smiles.He was a natural winner,'mule - ism' just ran effortlessly in his half equine half ass blood.
No race can begin without a comment on the track. The For-Mule-A track, the authorities assured would not bother the audience with the sweet smell of burning rubber. Instead, mule dropping fragrance will rise to the rubber devoid occasion to remind anyone and everyone of their humble roots. The race would commence from a pit stop in the hermit hiding district of Abbottabad and twine itself through the IED filled draws of the Khyber before exiting into the labyrinth peaks and dips of Waziristan which is home to the easiest language in the world ..a gun pointed to your head.

Zardari was unusually excited about the dead weight to be carted..it was a dust Bin, laden with blue prints of destruction. His mind oscillated between winning the race and the price of the weight.But as one would know, a mule has to do what a mule has to do....thus, he hoists the weight over and begins to majestically trot around the brass and starch of the midas touching uniformed junta . With a little covert friends in the military, he trips, pushes and ebbs his opponents over the edge.For cheering a dull and uninterested audience who opted for eye candy, there was of course, the political glamour quotient...a foreign minister in baiting !!

With the cargo that the mule of never ending pride carried, receiving aid to fill the large bowl was never a problem.Thus, the long and short of it,the winner it came around was the indisputable For -Mule-one....Asif Zardari.

With the grandeur of the ceremony complete, it was his scroll of honour that tickled the choked literary sense and the infinite libido of a failed state.It read:


This scroll of honour is bestowed on
FOR-MULE-ONE
Asif Zardari
who on this date has been declared the
Pakistan Grand Prick.


In true dictatorial style, someone down the chain of a jar headed command,had obviously not been able to distinguish between a Prix and a Prick. But the slip of words, just celebrated the inescapable truth.