PRANAB on a platter

“Ask not what you can do for your country. Ask what’s for lunch.”  :- Orson Welles

On the 19 of July 2012, the Congress party did just that, reducing to record, the national political pastime as orchestrated flatulence.What an indigestible meal was made of a good prime ministerial candidate ! 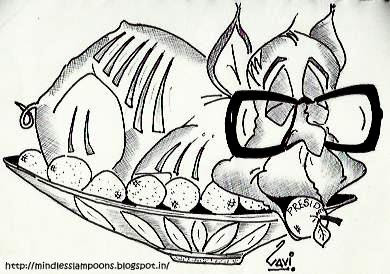 What many are not privy to, is the little story behind this delicate gastronomic disaster that has taken days to contrive. Afterall, every grand feast good or bad, carts with it a story.


Chef Diggy was busy sifting air in his makeshift scullery behind madams lawn when a commi de rang of questionable repute called Sibal, rushed to the floor of the kitchenette and bellowed " high time to create a masterpiece for the family." Chef Diggy was neither surprised nor shaken,but ever ready to please his masters. After all, he was the chosen one forced into both a political hiatus and a jesterly role, only to deliver the magnum opus.


The insidious Chef and the crafty commi set to work. With the math done, the flavourings in place, the cold cuts ordered and the garnishes readied, what just did not fall in place was how to 'hunt down the game' which is to be marinated,cooked and served on a social platter. Their masters were neither hunters not connoisseurs of the taste buds, they were after all just gluttonous foodies who would chomp at anything that stood their measly way.

Thus in wily party circles was coined the term 'sacrificial meal', where the man in the benevolent eyes of their masters was praised for having done so much for the nation and deserved a befitting retirement. He would be offered gratuity on a smouldering spit. The unsuspecting Babu moshai, also the erstwhile chairman of the Indian Statistical Institute,Kolkata, got his statistical count wrong,slipping,tripping,sliding and rolling deep into a coveted 'retirement grease trap'.

Trimmed of matter,as enough has been said in my earlier rants, this is the third sequel in this blog devoted to the well garnished and tastefully served babu moshai. An emboldened reference to earlier posts illustrating the first citizen to be:

Press I to.. Dent
(A dig at the 2012 Presidential Elections)

PRANAB MUKHERJEE : Needs must when the devil drives
(A cynical profile of the aura that looms around the 13th President)

Posted by http://mindlesslampoons.blogspot.com/ at Wednesday, July 25, 2012