RUSKIN BOND : What goes around,comes around

It is with a well meaning sentiment I attempt to replay cherishable slices from my formative years. During those knicker clad days,post dinner, my father followed a sedative ordeal.He would would lodge his warring  brat pack  on his cushioned lap and read aloud short stories from books piled up in the study. Those, were also the fragile moments, when serene tranquility descended in liberal servings to every rattled corner of our commotion garnished home. This process of story narration, constructively shaped our adult minds. My favored reading, revolved around the acclaimed works of two gentlemen, icons in their own right : Sir Baden Powell and Ruskin Bond. While the former shaped passion for outdoor living,field craft and a bouquet of lessons that formidable leadership programs would want to emulate, the latter nurtured love and respect for nature, an insight into the cherished wilderness and painted rural India as bursts of green hues where time stood still,only to be unsettled by the sighting of a wandering panther or the growl of a stray tiger seeking out a prey. 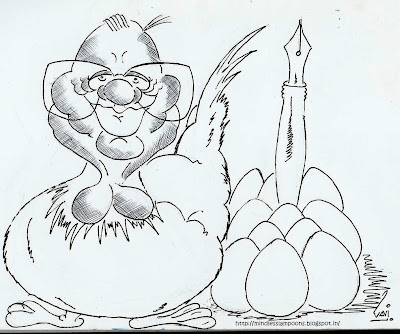 It was happenings like those that infused  a fresh contrast to the crisp settings that his words described. Ruskin Bond thrived on a charm well woven. In doing so, his  tales helped me dream of undulated stretches of land carpeted in pristine grass, divided by crystal clear streams, fenced by snow capped peaks and kissed by the rising sun. In such serene settings, little me always managed to find a cameo appearance. Interposed into my fathers narration, I bargained to be brave Tembu in The Tiger in the Tunnel,  Lion hearted Jai in The Eye of the Eagle, Little Bond in Grandpa tickles a tiger  and just me in the other many stories narrated. The Bond magic had become a staple nightcap that helped me slip into my own sphere.
On my part, I yearn to relive those moments, both as a father and a son. As a parent, I attempt to narrate Bond's captivating  aura to my six year old offspring.He first protests, then the charm of the man takes over........ !!
The caricature I have sketched is by no measure an attempt to mock the man who has left a deep impression on my literary taste and most importantly,the sense to merge with and respect our natural surroundings.

Posted by http://mindlesslampoons.blogspot.com/ at Wednesday, April 18, 2012